In this day and time, being a relatable and supportive Officer is even more critical. With this in mind, it is my passion to inspire pride in the department and encourage other officers to build trust with the public with reasonable policing and comradery.  I truly want what’s best for our officers and the public.

It is undeniable, this urge to keep others safe and happy started from a young age. Growing up, I watched my father don his badge and gun with pride and engage with the public on the daily. I realize now that my father took a handshake and greeting with anyone he met as an important aspect of his job. I still remember him saying, son never underestimate your first impression. An easy smile and a handshake go a long way with the outcome of any situation.

Carrying this sense with me that I too wanted to serve and protect, I first ventured on a military path enlisting in the United States Marine Corp. right after graduation. Yep, at 18, I was buzz cut and standing on yellow footprints only knowing that whatever I was supposed to do, I better do it fast and accurately. In the Marine Corps, I held the position of a Stinger/Avenger system crewman. Essentially, my job was to identify threatening aircraft and neutralize them with a shoulder-mount missile. And only under certain circumstances were you allowed to shoot the big bullet. Within two years of my four-year term, along with this common sense and many meritorious boards, I was promoted to Sergeant and led many junior Marines on various ops. Ultimately, I ended my Marine Corp. career with a long stint on a Marine Expeditionary Unit in the Mediterranean because even though I enjoyed the brotherhood of the Corp., my family and Law Enforcement were always calling.

So, in August of 2000, I attended and graduated the Wharton County Junior College Basic Police Academy. With this certification, I obtained my first job in Law Enforcement in December of 2000 with the Fort Bend County Sheriff’s office as a Deputy Jailer.  After a long four months of working in the Jail, I then went to work for the Rosenberg Police Department as a patrol officer. While working for Rosenberg, I became an FTO, a SWAT operator, an SFST Instructor, intoxilyzer Operator, and was the department’s first Drug Recognition Expert. In 2006, I was formally promoted to Sergeant through an assessment center. Also, during this year, I helped found the Rosenberg Police Officer’s Association and was the first ever elected president. Not lomg after this, I had my second child. As a night Sergeant, I craved more of a stable family environment and reluctantly took a position back with the Fort Bend County Sheriff’s Office with the hope I would be fast tracked to the Detective Division. Within months as an FTO, I then took a board and was promoted as a Burglary and Theft Detective and later a Gang Unit Detective. During my time as a Detective, I also attended Wharton County Junior College and earned all but 3 college credits for an Associates in Criminal Justice. I went on to attend the University of Houston where I am still working on my Bachelors. As one can tell, mainly through-out my career, I have focused more extensively on in-service training as I could really apply it in the work place. As a matter of fact, it was while I was attending a B&T in-service that a colleague who worked alongside the HPD Auto-Theft Division relayed to me all that HPD had to offer. And after careful consideration, I decided to make the leap.

So, I was hired by HPD in May of 2008 as a member of cadet class 199 and graduated from the Houston Police Academy in November 2008. I was very proud to obtain class honor graduate and the Top Gun award in marksmanship.  Upon graduation of the academy, I was assigned to Westside command where I finished out my probationary period and was then assigned to the Traffic Enforcement Division-DWI Unit. With my time in the traffic division, I not only worked DWI, but also worked in the highway interdiction unit, and the SOLO motorcycle detail where I have been assigned since March 2011.

On a personal note, I have been married to my high school sweetheart Mystie since 1996, and we have raised two amazing young men. Dylan who is currently enlisted in the United States Coast Guard as a Petty Officer 3rd class and Wyatt who is currently an honor student in high school. I enjoy time with family and friends, a good story, campfires, beaches, and a fish on my hook. 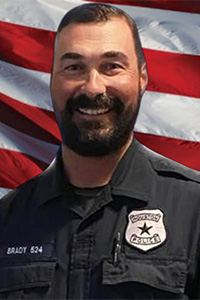