Officer John Daily was born in Houston, Texas. His family moved to Northern California when he was 9. Daily graduated from California State University Maritime Academy with a Bachelor’s Degree in Business and Logistics in 2016. Daily graduated from HPD Academy Class 232 in March of 2017, finished field training at Central Division, and began his career on Patrol working nights for Southeast Division. Daily became certified with the SRG unit shortly after completing the academy. Officer Daily is a member of the TNOA member, TX Gang member, and TTPOA member.

Officer John Daily was injured in the line of duty on December 24, 2018. He was hit by a suspected DWI driver, while responding to assist another unit with his partner, and suffered 3rd/ 4th degree burns to 52% of his body. In February of 2020 Daily was cleared to return to light duty, where he was stationed at The Crime Analysis and Command Center on transitional duty. Daily was medically cleared to return back to full duty in September of 2020 and looks forward to going back to Patrol in Southeast Division in October of 2020. Officer Daily is currently a member of TNOA and TTPOA. When not working, Daily enjoys spending time with his family and dogs, and working with his hands.

Much like on the night of his injury, Officer Daily plans to join the board to assist his fellow officers. Due to his injury he has gained knowledge, and more importantly, gotten to know the right people to assist in different situations. One of the most important things to Officer Daily is to see that officers who actively work hard to suppress the criminal element in our communities are being properly supported. 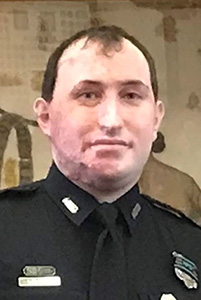