Officer Richard “Ricky” Brasuell was born and raised in Ganado, TX. Officer Brasuell joined the US Navy in 2000 and attended boot camp at Great Lakes, IL. Officer Brasuell was stationed onboard the USS Underwood in Jacksonville, FL, where he completed a six-month deployment to the Mediterranean, where he was selected as Junior Sailor of Quarter. Officer Brasuell was picked up for Cryptologic Technician Communications School where he graduated top of his class as Honor Graduate, which lead to Officer Brasuell being recruited to Seal Team Six support. While stationed at Seal Team Six, Officer Brasuell completed two tours to Afghanistan in support of Operation Enduring Freedom where he promoted to Petty Officer Second Class through the command advancement program. Officer Brasuell then served at NCTAMS LANT in Norfolk, VA as communications Watch Team Lead where he was selected as Sailor of Quarter. Officer Brasuell separated from the Navy in 2009 and in 2012 attended the University of Houston-Downtown Police Academy and started his law enforcement career at the Stafford Police Department. There he started and founded the Stafford Police Officers Association and served for 5 ½ years as a police officer, narcotics investigator, and patrol Sergeant. Officer Brasuell joined HPD in 2017 as a member of lateral class L11-17. Officer Brasuell is currently assigned to Kingwood on evening shift patrol. Officer Brasuell has an Associates in Police Science, Bachelors in Criminal Justice and is currently enrolled in the Masters Criminal Justice Leadership/Management at Sam Houston State University. Officer Brasuell is married to his lovely wife Randi, with who he has a 5 year old son and 11 month old daughter. In his off time, he enjoys spending time with his family, hunting, and fishing. Officer Brasuell and his family are members of Second Baptist Church. 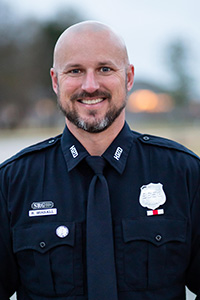