Tim Whitaker began his career with the Houston Police Department in January of 1986 and in June of 1986 graduated from Academy Class #133. He has been assigned to the Westside station his entire career. For 24 years Tim trained/evaluated over 200 probationary police officers. After 33 years on patrol Tim decided to move to the Community Service/DRT Unit at the Westside station.

In 2012 Tim was appointed to a vacant HPOU Board seat that he has held since that appointment. Tim is the President of Houston Officers Peer Assistance; the Union’s peer support program and he is the Chairman of the Line of Duty Death Committee. Tim was appointed to the Texas Commission on Law Enforcement by Governor Abbott in 2017.

Tim is a member and works on the Security Team at Second Baptist Church. 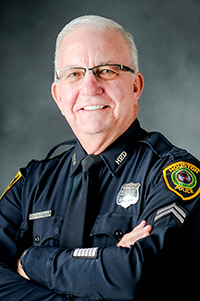