George A. Napier has been an attorney with the Houston Police Officers’ Union since 2019. Mr. Napier has been a licensed attorney in the State of Texas since 2012 and graduated from Paul M. Herbert Law Center at Louisiana State University in May of 2012. Mr. Napier received a Bachelor of Science degree in Business Administration, majoring in Economics, from the University of Southern Mississippi in 2008.

Prior to joining the HPOU legal staff, Mr. Napier was a prosecutor with the Montgomery County District Attorney’s Office for almost six years. There he gained substantial felony and misdemeanor trial experience. In addition to his work with HPOU, Mr. Napier represents persons charged with criminal offenses. Mr. Napier is married and has a son. 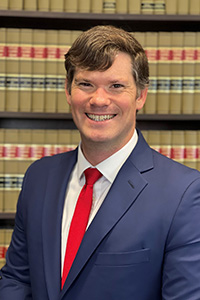